These ‘M’ modes have been defined in order to standardise the illumination conditions where Optical Brightening Agents (OBA) are used in substrates, in accordance with the International Standard Organisation 13655 standards.

Here are the 4 different measuring mode settings within the “M” series.

“Color measuring mode A” spectral luminance factor without polarisation filter under a light source A (gas lamps or LEDs, 2856 ± 100 K, from 420 to at least 700 nm)

Typically used in commercial proofing environments where little or no OBA (Optical Brightener Additives) are accounted for and where the standards values are measured in M0.

If used in Wide Format Print with PrintFactory and where a media contains OBA’s after printing/curing process, then it recommended that “Brightener Compensation” be checked “on” in whichever VISU variants are used (see below). 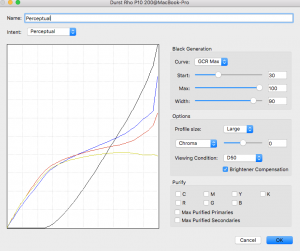 Calculated UV response to emulate UV excitation of OBA‘s (for paper only). For use with ISO 3664:2009 viewing conditions and used in commercial proofing with standards such as Fogra 51L & 52L.

High-quality ICC profiles, it allows the measurement effects of optical brighteners (OBA’s), through the comparison with a mode with UV components (M0/A or M1/D50 – depending on the selected illuminant in M2).

This mode is recommended for general use in Wide Format Printing and removes the spurious white point measurements of media containing OBA’s after the printing/curing process.

M3 simulates illumination with UV Cut – helps to reduce differences in measurement due to Specular Reflections.

M3 is for measuring:

Use of M3 filter in a Colour Managed Workflow 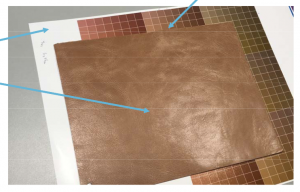 Glossy-Leather sample on top of Printout from Inkjet proofer on paper.

Conclusion on use of M3

Detecting for the presence of Optical Brighteners (OBA)

Using a photo spectrometer. Measure with and without a UV-Cut filter and see the difference in the b value.

If you do not have UV Cut filter for your photo spectrometer measure the b value – if paper looks fairly white but the b value says -5 to 10 ish indicating a blue tinge then you can be quite certain there are OBA’s in it. The more the negative value the more the OBA.

Was this article helpful?